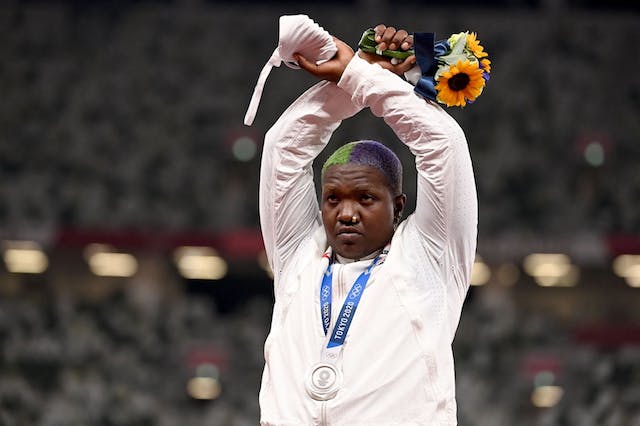 🏃‍♀️Track & Field: After finishing second in shot put to earn her first Olympic medal, Raven Saunders danced in celebration (a whole mood) before raising her arms in an “X” on the podium, the most high-profile protest at the games so far. Saunders later said the X symbolizes “the intersection of where all people who are oppressed meet." Powerful.

🏀Basketball: A’ja Wilson led the team in scoring (22 points) once again as the U.S. women pulled out a 93–82 win over France early this morning to finish group play undefeated. It was a closer margin than expected, leaving some lingering questions as the squad looks ahead to quarter-finals. No pressure, no medals, right?

🏊‍♀️Swimming: The 2020 Olympic swimming program has ended, but Katie Ledecky’s Olympic career is far from over. After earning her seventh career individual gold medal (a record for female swimmers) in the 800m freestyle on Friday, Ledecky reassured us she’s already looking ahead to Paris 2024.

⚾️Baseball: In their first knockout stage game, Team USA held on for a x–x win in a high-scoring contest against Japan. HYFR. The victory sends the squad to Wednesday’s 6 a.m. ET semifinal vs. South Korea. Let’s keep it rolling.