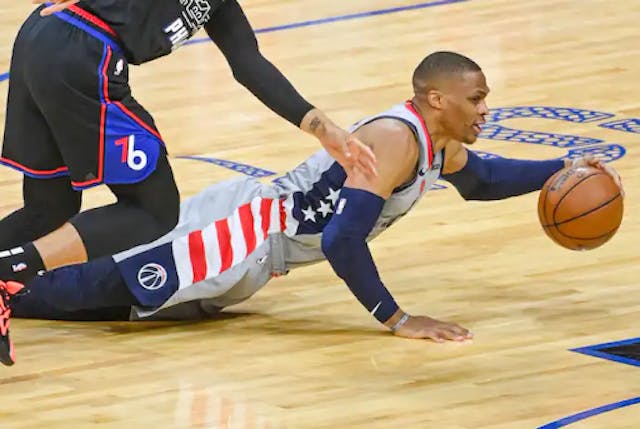 🏒Capitals: Another year, another first-round exit. The Capitals were eliminated from the playoffs with yesterday’s Game 5 loss to the Boston Bruins. And the Caps’ window for another Stanley Cup is rapidly closing: captain Alex Ovechkin (who isn't under contract for next year yet), winger TJ Oshie and center Nicklas Bäckström aren’t getting any younger. Time’s a-ticking.

🏀Wizards: Russell Westbrook would like that costly out-of-bounds call with 37 seconds left in Game 1’s loss to the Philadelphia 76ers back. See if the Wiz can steal Game 2 on Wednesday at 7 p.m. ET.

🏀Mystics: The Mystics won their first game of the season on Friday, trouncing the New York Liberty by 29 points (!!!) in Tina Charles’ revenge game. But the ’Stics couldn’t carry that momentum into Sunday, falling 89–77 to the previously winless Indiana Fever. Sigh.

⚾️Nationals: Pitcher Stephen Strasburg returned from the injured list to throw five and a third scoreless innings on Friday, first baseman Ryan Zimmerman became the franchise leader in runs scored on Saturday and the Nats swept the Baltimore Orioles yesterday? There’s that Natitude.

⚽️Spirit: The Spirit’s home opener on Wednesday is no more. The match against the Houston Dash was originally scheduled to take place at Segra Field but has been moved to Texas.

Segra Field is still under construction and according to Spirit owner Steve Baldwin, MLS’ United denied the Spirit’s request to play at Audi Field, the home of United. SMH.