The horrific off-field consequences of the FIFA men's World Cup

November 14, 2022
Host nation Qatar’s many human rights abuses are being buried by the excitement for the matches. So before the players take to the pitch, it’s vital to understand the horrific off-field consequences of the tournament. Let’s dig in.
Sports News 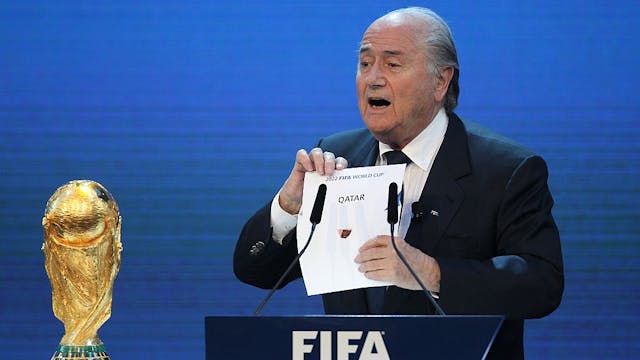 In hope of becoming the first Arab country to host a World Cup, Qatar launched a bid for this year’s edition back in May 2009. With a field that included Australia, Japan, South Korea and the U.S., Qatar was considered an unlikely winner for many reasons.

Despite these concerns, the FIFA Executive Committee (ExCo) awarded the World Cup to Qatar in December 2010. The country addressed some of the issues in the 12 years since: The tourney was pushed to the Northern Hemisphere's winter months for the first time, and Qatar loosened World Cup alcohol regulations and will allow Israelis to attend the event.

But the ExCo never chose Qatar for legitimate reasons — it was influenced by bribes. In 2020, the U.S. Department of Justice (DOJ) determined that three committee members were paid to vote for the Gulf nation’s bid.

While Qatar made some concessions in order to host the World Cup, the country’s abysmal human rights record has gone almost entirely unchecked by FIFA. Front and center? Qatar’s harsh labor conditions, which led to the deaths of at least 6.5K migrant workers who built infrastructure for the tournament. Sickening.

FIFA has also failed to adequately address protections for underrepresented groups in Qatar. Homosexuality remains illegal in the country, and LGBTQIA+ individuals are often subject to physical abuse and sexual harrasment when in police custody. Just this month, a Qatar FIFA World Cup ambassador called homosexuality “damage in the mind.”

Not long after Qatar won hosting rights, pressure mounted on both the country and FIFA. After a 2013 report spotlighted the systemic abuse of migrant workers, high-ranking human rights organizations kept constant watch on the country, repeatedly revealing its shortcomings.

Given all that backlash, Qatar and FIFA have scaled up messaging campaigns in an effort to spin the narrative and normalize its hosting of the World Cup.

Qatar is reportedly paying fans to attend the World Cup, offering free flights and tickets to supporters of each of the tournament’s 32 teams. The trade-off? Fans are contractually obligated to perform requested songs, refrain from bad-mouthing the host nation and, most disturbingly, they must report those who do. Major yikes.

FIFA’s also trying to curb player protest by literally telling teams to stick to sports. Leaders penned a letter to the 32 squads encouraging them to focus on football, so as to not allow the sport to be “dragged into every ideological or political battle that exists.” Gross.

Qatar will still be one of sportswashing’s heavy-hitters long after the World Cup ends. The nation will maintain its soccer footprint when it hosts next year’s Asian Cup, and its sovereign wealth fund still owns one of Europe’s most elite clubs — Paris Saint-Germain.

But in the near term, the biggest question is: What will happen to the millions of migrant workers and Qatar’s burgeoning labor rights movement after the trophy is awarded?