UMass — the Commonwealth’s flagship university — did us proud on Saturday. 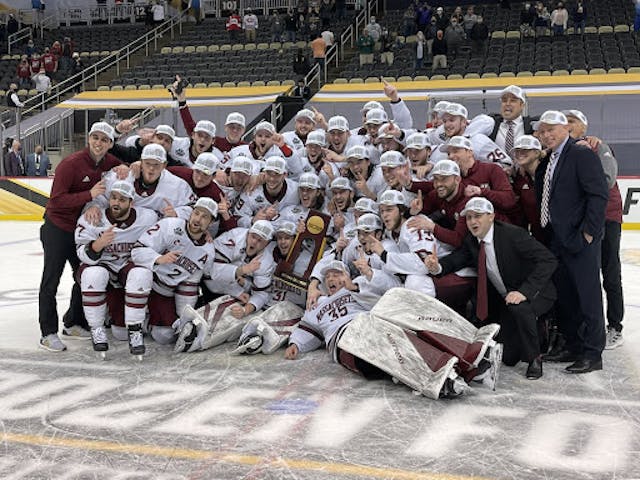 🎓🏒College hockey: UMass — the Commonwealth’s flagship university — did us proud on Saturday, dangling their way to a dominant 5–0 win over St. Cloud State to claim their first-ever NCAA men’s hockey title. Another banner for Beantown, baby.

⚾️Red Sox: Looks like the Sox are getting an early start on their spring cleaning as they picked up their second consecutive sweep with a 14–9 win over the Baltimore Orioles yesterday. After being placed on (and then testing off) the COVID-19 injury list for cold-like symptoms, designated hitter J.D. Martinez blasted three (!!!) home runs just one day later.

🏀Celtics: Jayson Tatum followed up his record-breaking 53-point performance on Friday with a double-double yesterday, leading the C’s to a 105–87 victory over the Denver Nuggets. Next up, the Celtics continue their West Coast road trip tomorrow against the Portland Trail Blazers at 10 p.m. ET. East Coast, beast coast.

🏒Bruins: The B’s couldn’t maintain the winning energy for Boston, falling 8–1 to the Washington Capitals yesterday. Yikes. Luckily, the Bruins have a chance to turn things around tomorrow night at 7 p.m. ET when they take on the last-place Buffalo Sabres.

The B’s couldn’t maintain the winning energy for Boston, falling 8–1 to the Washington Capitals yesterday. Yikes. But the loss was quickly overshadowed by last night’s blockbuster trade that has former NHL MVP Taylor Hall and winger Curtis Lazar coming to the Bruins for Anders Bjork and a 2021 second-round pick.