November 21, 2022
After squaring off against continental rivals to qualify for a spot at the quadrennial competition, 31 teams join Qatar, our problematic hosts, for the month-long tournament in hopes of being crowned world champs.
Sports NewsSoccer 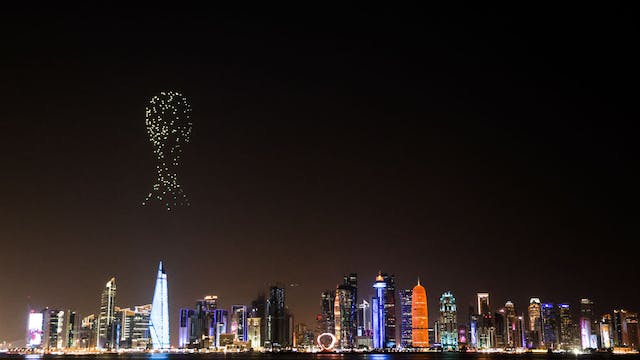 ⚙️ How it works

After squaring off against continental rivals to qualify for a spot at the quadrennial competition, 31 teams join Qatar, our problematic hosts, for the month-long tournament in hopes of being crowned world champs.

During the preliminary, round-robin stage of the World Cup, the 32 teams are divided into eight groups of four (A through H). Each will play three round-robin matches against their group foes.

Each knockout-round match is a winner-take-all affair. The round-of-16 teams will duke it out for a ticket to the quarter-finals before hopefully earning spots in the semis and the December 18th final.

The favorite: After failing to qualify for the 2018 edition and making an earlier-than-expected exit from the Euro 2020, a resurgent world No. 8 Netherlands team is eyeing the group’s top spot. Veteran head coach Louis van Gaal came out of retirement for the team’s rebound, but the Dutch will need attackers Frenkie de Jong and Memphis Depay to stay healthy for a deep run.

The dark horse: No. 44 Ecuador qualified for the World Cup thanks to a squad rejuvenation, arriving in Qatar with one of the youngest rosters in the tourney. And though the team will be without a few key players because of injuries, they still have a group of attackers eager to make this trip a memorable one.

The players to watch: Defender Virgil Van Dijk is a beacon of stability for the Netherlands, while attacker Boulaye Dia will be tasked with filling in for Senegal in Mané’s absence. Midfielder Moisés Caicedo will be crucial for Ecuador's success, while Qatar attacker Akram Afif is peaking at just the right time.

The favorite: No. 5 England has spent the last few years making its case as a contender, reaching the 2018 World Cup semis and the 2020 Euro final. Several important players from those teams made the trip to Qatar, but the aim for a young yet experienced English team is to quit being the bridesmaid and to bring the country’s second World Cup title home.

The dark horse: No. 20 Iran enters its third consecutive World Cup as Asia's highest-ranked team and has a reputation of showing impressive defensive mettle while struggling to score goals. Team Melli is hoping to boost themselvesinto their first-ever knockout berth, despite the risk that Iranian officials will use it to detract attention from the country’s continuing human rights crisis.

The players to watch: England’s Harry Kane set an English record with 13 international goals in 2021, and fellow forward Phil Foden is in the best form of his career. Christian Pulisic will be key to solving the U.S.’ attacking issues while his teammate, 19-year-old midfielder Yunus Musah, is poised for a breakout tourney.

The favorite: You just don’t bet against Lionel Messi, who’s back at the World Cup with perhaps his best supporting squad yet. The reigning South American champs, No. 3 Argentina, are one of the favorites to win the whole thing, boasting a mix of veterans and younger players hungry to win the country’s third World Cup.

The players to watch: While Messi dazzles, center back Cristian Romero will lead Argentina’s defensive strategy and spur their offensive approach (as long as he stays fit). Mexico’s longtime goalkeeper, Guillermo “Memo” Ochoa, is a must-know, and the same goes for Saudi midfielder Salem al-Dawsari, nicknamed “The Tornado.”

The favorite: Defending champions No. 4 France will aim to sideline internal squabbles so they can lift back-to-back World Cups, boasting a stacked squad. Forward Kylian Mbappé is ready to succeed Messi as soccer’s biggest star, while midfielder Aurélien Tchouaméni is an ideal candidate to maintain balance in the absence of injured N’Golo Kanté and Paul Pogba.

The dark horse: No. 30 Tunisia is eyeing its first-ever knockout-stage spot after steadily improving over the last few years thanks to new recruits like midfielder Aïssa Laïdouni. The team is also feeling hype after impressive wins over Japan and Chile in June.

The players to watch: Denmark can count on Pierre-Emile Højbjerg and Thomas Delaney to find balance in midfield. Tunisia’s goalscoring hopes lie with Youssef Msakni, while midfielder Jackson Irvine will provide stability for the Aussies.

The favorite: No. 7 Spain has successfully rebuilt after losing most of their 2010 World Cup–winning team to retirement, and they’re a dark horse candidate to win the whole thing again in 2022. But while they boast lots of exciting offensive talent, La Roja’s defense is a weakness, so expect some high-scoring matches.

The dark horse: Like Spain, No. 24 Japan heads to the big stage with lots of youth but has a couple of old-timers still in the mix. The bad news for the Samurai Blue? Their forwards aren’t great at scoring. The good news? The rest of the squad pitches in when goals are needed. Teamwork makes the dreamwork.

The players to watch: Just shy of his 20th birthday, Spanish midfielder Pedri is arguably one of the most talented players at the World Cup. Midfielder Leon Goretzka will be central to Germany’s success, while Japanese attacker Junya Ito may be his team’s best chance for goals.

The favorite: This is perhaps the last chance for No. 2 Belgium’s golden generation to actually win something. Many of their star players are at the end of their peak years, but the team’s overall quality is still undeniable. It sure helps to have creative midfielder Kevin De Bruyne, one of the world’s best.

The dark horse: Back at the World Cup for the first time since 1986, No. 41 Canada is all in despite inconsistent results in the run-up to the tournament. Generational talent Alphonso Davies will lead the attack-minded team.

The players to watch: Belgium’s Romelu Lukaku and Eden Hazard will be counted on to accompany De Bruyne in attack. Modrić will do the job up top for Croatia with defensive midfielder Marcelo Brozović maintaining the balance.

The favorite: As the record-holding five-time champs, it’s no wonder No. 1 Brazil is expected to be in contention for lucky number six. Problematic forward Neymar is no doubt looking to finally be the star of the World Cup, but he won’t have to lead offensive efforts alone — fellow attacker Richarlison’s stock is on the rise.

The dark horse: With a midfield full of talent, No. 21 Serbia is liking its chances. Captain Dušan Tadić and Co. will no doubt be on a revenge tour after missing out on the 2020 Euro.

The players to watch: Brazil is truly loaded with attackers, so, in addition to Neymar and Richarlison, expect Vinícius Júnior and Antony to make a mark. Switzerland midfielder Granit Xhaka is having a career-best year, while Serbian forwards Aleksandar Mitrović and Dušan Vlahović are in impressive form.

The favorite: Renowned for their attacking talent, No. 9 Portugal is favored to top the group but is on high upset alert, especially with controversial forward Cristiano Ronaldo past his peak at age 37 and other goalscorers out of form.

The dark horse: No. 28 South Korea is seen as a long shot to make the knockouts, but a few key players could make it happen. Korean icon (and part-time model) Son Heung-min is just a few months removed from winning the Premier League’s Golden Boot award, but he’s battling a facial injury that could limit his playing time.

The players to watch: Portuguese midfielder Bruno Fernandes (a recent critic of FIFA and Qatar) is one of the team’s most skilled players. Fellow gifted midfielder Rodrigo Bentancur is central to Uruguay’s youth movement.