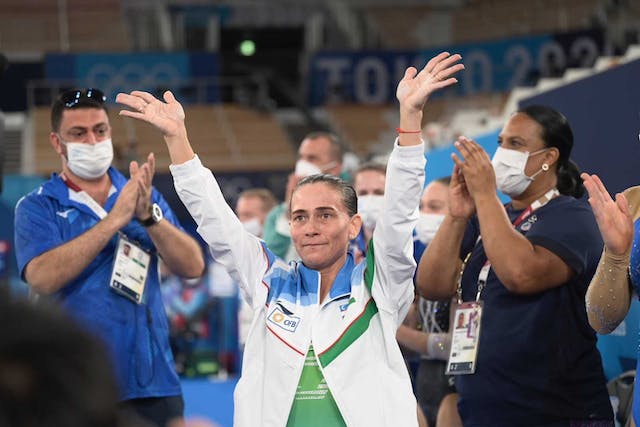 🤸‍♀️Gymnastics: Uzbek gymnast ​​Oksana Chusovitina made her eighth Olympics appearance on Saturday, and after failing to qualify, the 46-year-old announced her retirement. Chusovitina initially chose not to retire back in 2002 in order to pay for her son’s medical bills, and nearly 20 years later, she plans to spend time with him in Italy in her retirement. Happy trails, Oksana!

⛳Golf: American Bryson DeChambeau and Spaniard Jon Rahm had to withdraw from Thursday’s men’s tournament due to positive COVID-19 tests, which is extra baffling for Rahm, considering he’s double vaccinated and already had the virus in June (which he found out about on the 18th green at Memorial). Get well soon.

👋Early exits: It was goodbye too soon for a few top Canadians this weekend. Boxer Mandy Bujold, who “fought like a mother” to make it to the Games, was ousted on Saturday, tennis doubles pair Gaby Dabrowski and Sharon Fichman and singles phenom Felix Auger Aliassime lost in the first round, and young star Leylah Annie Fernandez lost in the second. Until next time.