End of an era

September 26, 2022
It’s the last Sunday of September, a month that saw not one, not two, but three sports greats retire, with Serena Williams, Sue Bird and Roger Federer all hanging ’em up. And those retirements came after another legend, Allyson Felix, crossed her final finish line in August.
Sports NewsTennisBasketballRunning 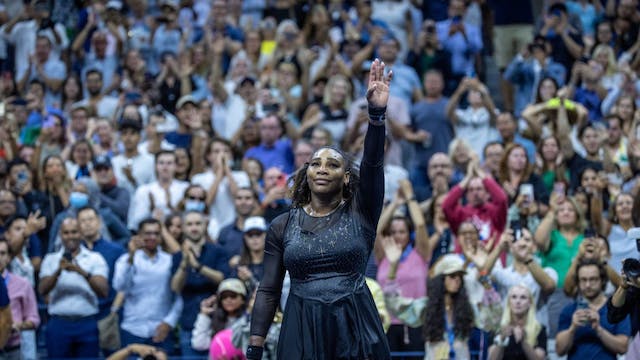 We have to start with Serena, who gave us a run to remember at the US Open earlier this month, besting the world No. 2 to advance to the third round in what was (likely) her final major.

Which brings us to the future. There’s only one Serena, but there are countless athletes she’s inspired. One up-and-comer poised to follow in Serena’s footsteps is 18-year-old Coco Gauff, who reached her first Grand Slam final at the French Open earlier this year.

But like Serena, Felix’s greatest impact came outside competition, most notably by championing motherhood in sports. She memorably spoke out against then-sponsor Nike in 2019 when the company tried to reduce her salary while she was pregnant.

All to say, it’ll be tough to fill Felix’s running shoes. But 23-year-old Sydney McLaughlin may be next in line. Felix herself recognized McLaughlin’s shine back in 2016, long before the hurdler began shattering her own records on the biggest stages.

Sue Bird’s unparalleled 20-year WNBA career was nearly as long as the league itself. She spent every minute with the Seattle Storm, notching 13 All-Star nods and a handful of league records including most assists and games played, while also racking up four championships across three different decades. Longevity personified.

And you might be sensing a pattern: Bird’s legacy is bigger than ball. She’s helped others live their truths through her power-couple relationship with USWNT star Megan Rapinoe. And as WNBPA vice president, she helped flip the U.S. Senate when players backed Rev. Raphael Warnock’s 2020 campaign.

While Bird ponders her next move, the question of who becomes the next face of the W is fraught — it’s no secret that media coverage and marketing have disproportionately focused on the league’s white stars.

🎾 King of the court

The rest of the Big Three haven’t hung ’em up just yet, but tennis fans already have a new contender to celebrate — 19-year-old Carlos Alcaraz, who recently won the US Open and that coveted world No. 1 spot.