America’s real pastime is here: the NFL season begins today! And we have everything you need to know before Opening Night kickoff...or before your GIST-exclusive FanDuel fantasy draft.

They basically stole our chance to go to the Super Bowl. Stole it away from us. Hate you, Tom Brady.

— Green Bay Packers linebacker Za’Darius Smith, talking about the Tampa Bay Buccaneers’ win over the Packers in the NFC Championship. You’re not the only one, Za’Darius.

The NFL kicks off tonight — the Thursday after Labor Day, like clockwork — with a game hosted by the reigning Super Bowl champs. At 8:20 p.m. ET, the Tampa Bay Buccaneers will welcome the Dallas Cowboys to Raymond James Stadium.

For the first time ever, each team will play 17 regular-season games — one more than last year — over 18 weeks (including a “bye” week), in which they play each divisional rival twice.

Tampa Bay Buccaneers: The reigning Super Bowl champs are ready to go back-to-back. Dream duo quarterback (QB) Tom Brady and tight end (TE) Rob Gronkowski are in prime positions to lead the Bucs to another championship, and with the fourth-easiest schedule in the league, they could become the second Florida team to record a perfect season.

Kansas City Chiefs: After losing the big one to the Bucs, KC is looking to get back to their 2019–20 Super Bowl–winning ways. Five of the NFL’s Top 100 players — including No. 1, QB Patrick Mahomes — are on the squad and their core group hasn’t changed much in the off-season. We wouldn’t be surprised to see a Bucs vs. KC Super Bowl again.

Buffalo Bills: Ever since Josh Allen became starting QB in 2018, things have been looking up for the Bills. Last season, he led the team to their first AFC Championship Game since 1993 and first AFC East divisional title since 1995. We’re predicting the Allen era will bring many more celebrations.

Green Bay Packers: Though things were looking shaky this offseason, with QB Aaron Rodgers reluctantly back at the helm, the Packers are looking primed to return to the NFC Championship Game this year. With Rodgers locked in for likely one more season, this could be the Pack’s last good chance at a championship for a while.

Baltimore Ravens: We’re not going to let star running back (RB) J.K. Dobbins’ season-ending knee injury stop us from including the Ravens here, because there’s a back-up plan.

Cleveland Browns: After ending a 17-year playoff drought last season, the Browns have almost everything they need to return to the postseason: an incredible roster, a steady coaching staff and a dog as their mascot.

Seattle Seahawks: The Seahawks are poised for greatness once again. Though their last Super Bowl win was in the 2013 season, they’ve consistently performed well in the regular season and haven’t missed the postseason since 2017. If QB Russell Wilson is firing on all (or at least most) cylinders, they’re in good shape.

San Francisco 49ers: This team is good. And it seems like QB Jimmy Garoppolo will be the leading man in SF this season. He led the team to a Super Bowl appearance in 2019 but was plagued with injuries last season. This should be interesting.

Joe Burrow, QB: The Cincinnati Bengals are probably not destined for the playoffs, but if anyone can prove us wrong, it’s 2020 first overall draft pick Burrow. Before a Week 11 knee injury ended his rookie season, Burrow was breaking records like it was his job, and now that he’s healthy again, he’s already a favorite to win NFL Comeback Player of the Year.

Dalvin Cook, RB: The Minnesota Vikings aren’t the most exciting team: if they were wings, they’d be honey garlic. But Cook is extra hot ‘n’ spicy, and he’s poised to best his 1,557 rushing yards and 16 touchdowns (TDs) from last year. There’s just one thing that could hold him back from recording another career-high season: he’s not vaccinated.

Darren Waller, TE: The Las Vegas Raider has all the talent to be the best TE in the league...with none of the pressure. With Kansas City’s Travis Kelce — aka No. 5 on the NFL Top 100 — stealing that spotlight, No. 35 Waller can flourish as QB Derek Carr’s No. 1 receiver.

Stefon Diggs, WR: We give QB Josh Allen a lot of credit for the Bills success last year, but a QB is nothing without someone to pass to. Enter Diggs. Allen’s top target hit career-highs in receiving yards and receptions last season — his first in Buffalo — and has everything in place to best his career TD record this year.

LA Rams, Defense: With defensive tackle Aaron Donald leading the D-line and cornerback Jalen Ramsey leading the secondary, the top defense in 2020 has high expectations to repeat. That said, they’ll need to do it without former defensive coordinator Brandon Staley, who will share a stadium with the Rams as the Chargers’ new head coach...awkward.

Rookie QBs: Every new season comes with a handful of bright-eyed young QBs ready to make their mark on the big league. Some will flourish, some will flounder, only time will tell. This year, we’ll be watching Jacksonville Jaguars’ Trevor Lawrence, New England Patriots’ Mac Jones, Chicago Bears’ Justin Fields and New York Jets’ Zach Wilson.

Schedule changes: COVID-19 did a number on the NFL’s schedule last season, so the league is cracking down this year, warning teams that outbreaks among unvaccinated players could lead to forfeited games.

The fun starts now. Tune in to NBC in the U.S. and TSN in Canada at 7 p.m. ET tonight to catch Ed Sheeran ring in the new season (weird flex, but okay) before opening kickoff at 8:20 p.m. ET. And then check out the full schedule and TV coverage for your favorite teams and players here. Hut hut!

🎾Updates from the US Open quarter finals 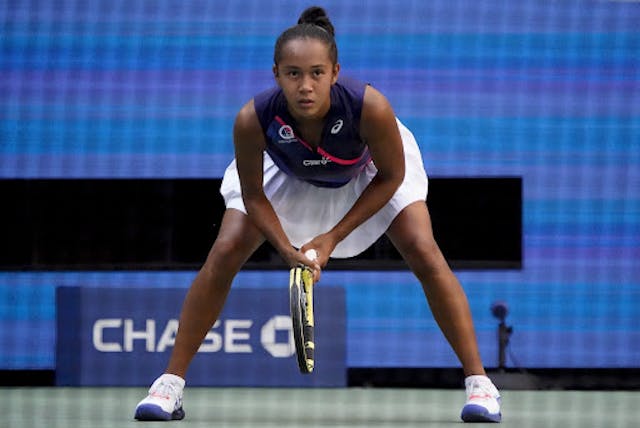 WTF: It’s not all sunshine and roses at the US Open though. The online abuse faced by many women is shocking and saddening, with American Shelby Rogers anticipating death threats after her loss to Raducanu, and Sloane Stephens revealing she received at least 2,000 racist and sexist messages after her third-round oust.

And with athletes like Naomi Osaka hinting at taking an indefinite hiatus from tennis, it makes you question whether being a pro female athlete with good mental health is even possible. 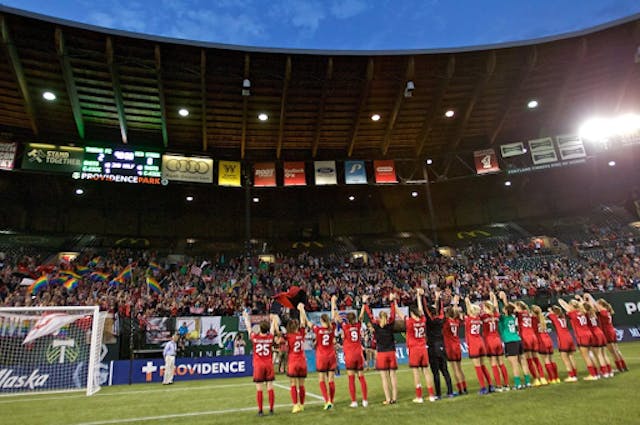 Timing: CBS is the rights holder for the NWSL Championship game. And due to college football coverage, CBS can’t air any other sport past 3:30 p.m. ET/12:30 p.m. PT, thus forcing the NWSL to hold their final at breakfast time. If only there were other days in the week...

Turf: And the stadium they’ll play in — Providence Park in Portland — is the only turf field in the entire league. Players despise playing on turf as it leads to additional joint stress and injuries, retains excessive heat and creates unnatural ball bounces. Not good.

The big picture: As Olympic gold medalist Janine Beckie tweeted, “if you don’t know why [this is unacceptable], you’re part of the problem.”

🎾Updates from the US Open quarter finals

WTF: It’s not all sunshine and roses at the US Open though. The online abuse faced by many women is shocking and saddening, with American Shelby Rogers anticipating death threats after her loss to Raducanu, and Sloane Stephens revealing she received at least 2,000 racist and sexist messages after her third-round oust.

And with athletes like Naomi Osaka hinting at taking an indefinite hiatus from tennis, it makes you question whether being a pro female athlete with good mental health is even possible. 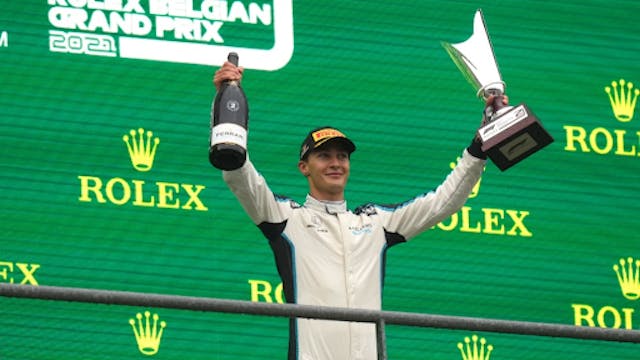 🏎F1: The worst kept secret in motorsport is finally out in the open. A day after Valtteri Bottas announced he was leaving his longtime team Mercedes to join Alfa Romeo next season, Mercedes announced George Russell as their newest driver and Lewis Hamilton’s future teammate.

🏒Hockey: The NWHL got a facelift, and we have...mixed feelings. The league announced its rebrand yesterday, complete with a new name — the Premier Hockey Federation (PHF) — and a new logo, but they have yet to announce a change to its inclusion policy, a plan for increasing player salaries or a way to improve TV coverage. Plenty of work yet.

🏈College: The first AP Top 25 Poll of the college football regular season (not including Week 0) was released yesterday, and Clemson is out of the top four for the first time since 2017, while Georgia jumped three spots to No. 2 behind No. 1 Alabama. Let the shuffle begin.