November 24, 2022
You take care of the food, we’ll dish on today’s three-course feast of NFL action. Time to dig in.
Sports NewsFootball 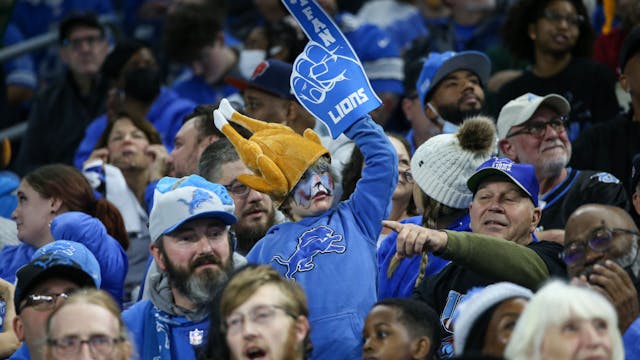 The GIST: Just like cranberry sauce, the Lions are a disappointment of a Turkey Day staple. Save a six-year stretch during World War II, they’ve played every Thanksgiving since 1934, posting a dismal 37-43-2 (wins, losses, ties) record on the holiday.

Lions: Yes, Detroit’s known for their Thanksgiving struggles, but they are on an impressive three-game win streak, including last week’s big W over the then-surging NY Giants. It’ll be up to QB Jared Goff and wide receiver (WR) Amon-Ra St. Brown to ensure they don’t suffer a scoring hangover.

Bills: If the Lions are cranberry sauce, the Bills are mashed potatoes, aka the clear favorite. QB Josh Allen continues to get the job done with his arm and his legs while WR Stefon Diggs is magic when he gets the ball. Like ice cream on crisp apple pie, this duo is perfection.

Prediction: With the Lions on a hot streak and their head coach Dan Campbell firing his squad up with speeches like this, this should be closer than many might expect. But the Bills, who also boast an elite running back (RB) in Devin Singletary, simply have too many offensive weapons to overcome. Ready those tables, Bills Mafia.

The GIST: Come for the Jonas Brothers halftime show, stay for this must-see matchup between two star-studded NFC East contenders.

Cowboys: Like the Lions, the ’Boys have been a Thanksgiving mainstay since 1966, but they’ve seen much more success, accumulating a 31-22-1 record. And America’s Team looks poised for another dub, especially fresh off a massive Week 10 win in which they put up 40 points.

Giants: The G-Men were off to one of their best starts in recent history, but they’ve since stumbled into a skid, losing two of their last three. They can’t blame that on the tryptophan, but they can blame it on turnovers — the Giants made three costly mistakes in last week’s blowout L.

Prediction: Dallas came out on top 23–16 when these squads met in Week 3, and that was on the road and without QB Prescott due to injury. That said, Barkley’s primed for a statement game after last week’s lackluster showing. He’ll certainly give ’em pumpkin to talk about in this rivalry battle.

The GIST: Save room for this delicious showdown between two squads with plenty to prove. The Pats are just holding onto a playoff spot, while the Vikings are trying to show they’re the real deal after an ugly loss last week. Pass the whipped cream, please.

Patriots: The Pats come sputtering into their first Thanksgiving appearance since 2012. Helmed by second-year QB Mac Jones, New England’s offense has been inconsistent at best as the squad still struggles to find their groove in the passing and running game.

Vikings: Lizzo’s favorite team had largely flown under the radar until their jaw-dropping Week 10 “game of the year” win over the Bills, but then they followed it up with a Week 11 clunker that was even too painful to air on TV. So the big question is, which Minnesota squad will show up tonight?

Prediction: Minnesota holds the slight edge at home, but their QB Kirk Cousins would definitely prefer a midday dinner meal — the 34-year-old’s notorious for struggling in primetime. Pair that with the fact that the Pats are led by potato lover/legendary head coach Bill Belichick, and we’re leaning New England in this one.