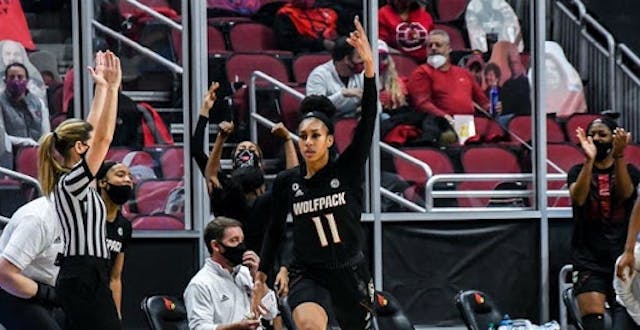 The GIST: You literally can’t win ’em all when it comes to women’s basketball (WBB) this season. Thanks to Monday’s thrilling upset, there are no longer any undefeated teams in the top 25. Spicy.

🏀Upset alert: The game was delayed by COVID-19 challenges, but No. 1 Louisville finally squared off against No. 4 NC State on Monday...and the teams did not disappoint. Thanks to the return of NC State’s star center Elissa Cunane, the Wolfpack earned the upset win, beating Louisville 74–60.

💪Top players to watch: The late season Wooden Award Watch List (MVP of WBB) was released on Monday and, just like this year’s NCAA Championship, it’s tough to predict who will take home the honor.

❤️Coaches to watch: Dave and Maureen Magarity squared off earlier this season for the first-ever father-daughter Division 1 college basketball coaching matchup, giving us all of the #GirlDad feels. And now, as Dave prepares for his retirement, his final game will be this Sunday at 3 p.m. ET, against Maureen’s Holy Cross squad. Get your tissues ready.