January 23, 2023
With only two and a half months until college hockey’s national tourney, the fellas have been bringing bedlam to the ice.
College SportsHockey 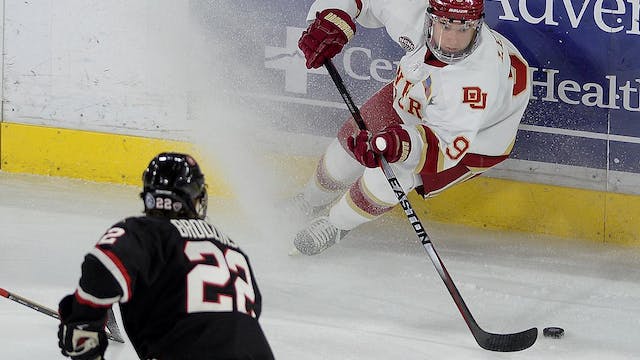 The GIST: With only two and a half months until college hockey’s national tourney, the fellas have been bringing bedlam to the ice. Here’s who’s acing their tests and who’ll need a whole barrel of late-season apples.

The weekend: Mid-January must be for drama because the men’s score sheet was a gongshow of upsets all weekend. Taking the most hits? The No. 1 Quinnipiac Bobcats, who dropped first to No. 16 Cornell in a 4–0 shutout on Friday, snapping the Bobcats’ 17-game win streak, and second to unranked Colgate 3–2 on Saturday. Ouch.

Shooting for the Frozen Four: Unlike the women, who will hoist their hardware on March 19th, the men will be lighting lamps until April 8th. But only 16 teams (six conference champs plus 10 at-large selections) will glide into the playoffs hoping to watch the Frozen Four from the ice in Tampa, FL.

Elsewhere on the women’s ice: As much as the men made mayhem, the women kept the weekend close to the status quo, with only No. 15 Boston College having a pair of bad days, losing to unranked New Hampshire 5–3 on Friday and unranked Maine in a 2–1 overtime battle on Saturday.