The GIST: The Celtics players aren’t messing around. Presenting a unified front, the players released an op-ed in the Boston Globe yesterday asking Governor Baker to reconsider his stance on the police accountability bill. 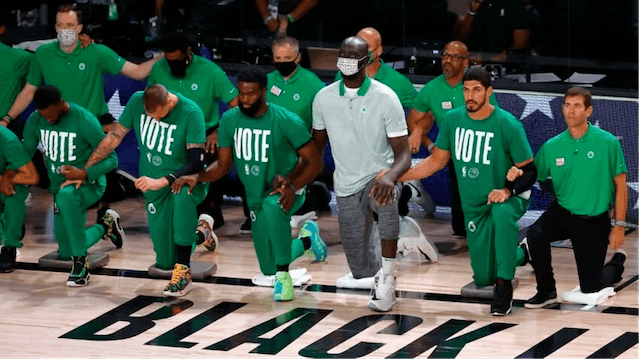 🏀Bigger than ball: The byline read “Boston Celtics Players,” and 17 athletes’ names were listed at the bottom of the Boston Globe piece, stating, “[W]e were disappointed to see that Governor Charlie Baker, in his amendments to the police reform legislation, removed the bill’s proposed regulations of government use of facial recognition technology.”

Leading the way: The Celtics are no strangers to leading the fight against racial injustice. Jaylen Brown, who was recently named a Bostonian of the Year, drove from Boston to organize a protest in his hometown of Atlanta shortly after the murder of George Floyd.

🏈One more thing: Moving on to the Patriots. For the first time since 2008, the team won’t be AFC East champions and will likely miss the playoffs. Sigh. Still, we hope the Pats (and wide receiver Julian Edelman, who returned to practice yesterday) finish the season strong, starting with the Miami Dolphins on Sunday at 1 p.m. ET.