November 28, 2022
While the regular season may officially be in the books, Week 13’s rivalries finalized the first step in the FBS postseason — conference title games.
College SportsFootball 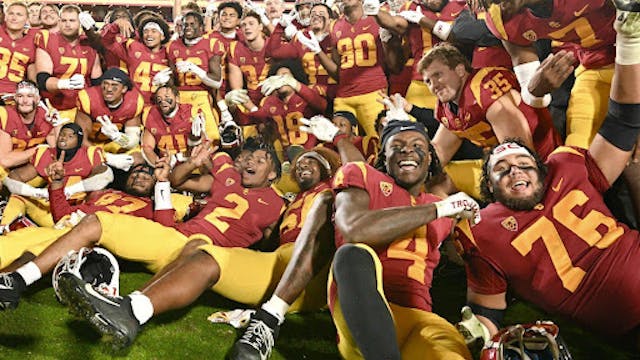 The GIST: While the regular season may officially be in the books, Week 13’s rivalries finalized the first step in the FBS postseason — conference title games. Here’s how the Power Five’s championship-bound squads fared this weekend.

Big Ten-sion: While Purdue clinched the notoriously terrible Big Ten West on Saturday, the battle for the Big Ten East got pretty chippy at “The Game.” Not only did the now–No. 2 Michigan Wolverines demolish the now–No. 5 Ohio State Buckeyes 45–23, they did so in the ’Shoe for the first time since Buckeye QB C.J. Stroud was born. Maize? Planted in Columbus.

No Big 12 surprises: After a season full of Big 12 bedlam, Saturday went as expected. New–No. 3 TCU’s undefeated season is alive and well after a 62–14 rout of Iowa State, and the new–No. 13 Kansas State Wildcats secured their conference final spot with a 47–27 dub over Kansas. Mischief, managed.

Unpacking the Pac-12 house: Entering the weekend there were three teams — Oregon, Utah and Washington — still in contention for the Pac-12’s remaining title game ticket. Now–No. 4 USC already clinched their bid, and QB Caleb Williams put a Heisman-worthy bow on it in Saturday’s 38–27 win over now–No. 19 Notre Dame.

An SEC–ya next year: Still–undefeated No. 1 Georgia and now–No. 11 LSU came into Saturday as a lock for the conference ’ship and, while Georgia fared well, LSU was stunned 38–23 by the SEC basement’s Texas A&M Aggies. CFP hopes? The Bayou Bengals don’t have ’em.