Fans will be allowed inside Lincoln Financial Field for the first time this season, and all eyes will be on Eagles' new wide receiver Travis Fulgham 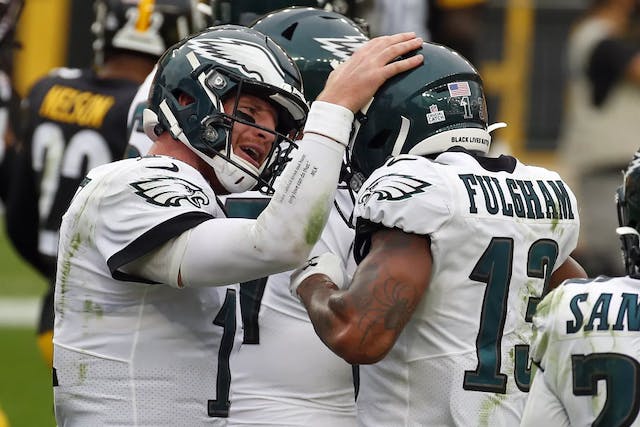 The GIST: With fans allowed in Lincoln Financial Field for the first time this season (not, not nervous), it’ll be a big week for the Eagles — and new stand-out wide receiver (WR) Travis Fulgham — when they host the Baltimore Ravens on Sunday at 1 p.m. ET.

Who’s this new WR?: All anyone’s been talking about since the San Francisco 49ers game is WR Travis Fulgham. After his huge catch in the Eagles’ first (and only) win this season, Fulgham showed out again last week with 10 catches and 150 yards against the Pittsburgh Steelers.

Where’d he come from?: Fulgham has always been a diamond in the rough. Out of high school, he had no scholarship offers, so he decided to walk on at Old Dominion. After a stand-out senior season, Fulgham was drafted in the sixth round by the Detroit Lions in 2019, just to be cut after one year on the practice squad.

What else?: Outside of watching Fulgham, keep an eye on how the fans’ return to the Linc impacts the Birds. The limited seats will first be sold to season ticket holders, and any extras will be offered to the general public. Wear a mask and stay safe, Philly!