November 07, 2022
The college football season may be on its downward slope, but the excitement’s ramping up. Week 10 saw two (!!!) undefeated squads fall, leaving just four teams in the 9-0 club. Here are a few others who understood Saturday’s assignment.
Sports NewsFootball 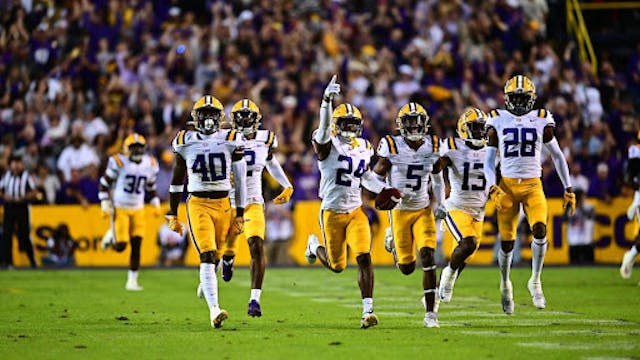 The GIST: The college football season may be on its downward slope, but the excitement’s ramping up. Week 10 saw two (!!!) undefeated squads fall, leaving just four teams in the 9-0 club. Here are a few others who understood Saturday’s assignment.

Going for broke: LSU head coach (HC) Brian Kelly showed why Tiger Stadium’s moniker is Death Valley, calling a do-or-die two-point conversion to beat now–No. 10 Alabama 32–31 in overtime. The win sparked emotion, while earning LSU the top spot in the SEC West and an eight-spot poll jump to No. 7.

Clemson and the terrible, horrible, no good, very bad day: You know it was rough when the HC calls it “an ass-kicking.” From now–No. 20 Notre Dame’s first blocked punt touchdown (TD) to now–No. 12 Clemson’s QB1 DJ Uiagalelei’s (pronounced oo-ee-ANH-gah-leh-lay) second benching of the season, the Tigers’ loss on Saturday was brutal.

The early bird gets a bowl berth: Except for undefeated No. 4 TCU, the Big 12 continues to lean into its Katy Perry season as the Kansas Jayhawks and now-unranked Oklahoma State Cowboys swapped hot and cold temps in their matchup this week. Kansas’ 351 rushing yards — 224 of them thanks to running back (RB) Devin Neal — ensured their 37–16 dub.

No fourth down for you: The noticeably thin — but absolutely warranted — Michigan State defense allowed 441 yards on Saturday. But the Spartans came through on five of now–No. 21 Illinois’ six fourth down attempts to seal the 23–15 W and end the Illini’s six-game win streak. Sparty on.