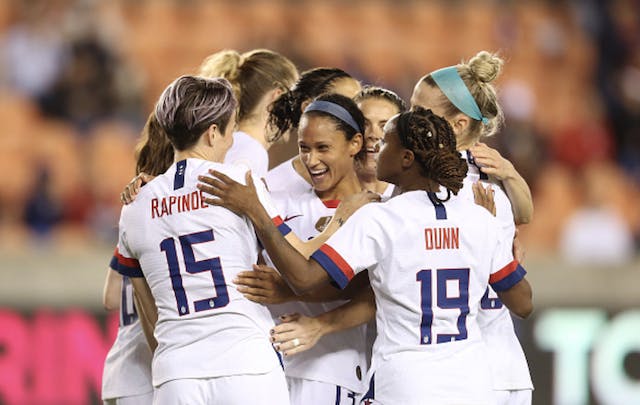 The GIST: We’re less than six months away from the Tokyo 2020 Summer Olympics. And you know what that means? It’s Olympic qualifier season, baby!

Sweet! Tell me more: Sure thing! Our women’s national soccer team is currently competing in the CONCACAF Olympic Qualifying tournament and they absolutely dominated in the group stage, winning all three matches and outscoring their opponents 18–0. Having swept their group, they’ll now face Mexico in tomorrow night’s semifinal at 10 p.m. ET.

You’re telling me. Do we have a good chance to win?: As reigning FIFA World Cup champions, our USWNT is, of course, expected to make it through. *knocks on wood furiously*

Got it! Anyone else qualifying?: To no one’s surprise, our women’s national basketball team already secured a spot in Tokyo after taking gold in the 2018 Women’s Basketball World Cup. Queens. That said, they’ll still be playing in one of the four FIBA Women’s Olympic Qualifying tournaments taking place this weekend. The tournament consists of three games for each team and as a member of Group A, we’ll be taking on Nigeria, Mozambique and host country Serbia in Belgrade.

Although nothing’s really on the line, we’re still bringing some serious star power: four-time Olympic gold-medalist Sue Bird is being joined by Breanna Stewart who is finally making her return to Team USA after missing a full year with a torn Achilles injury. Guess who’s back, back again.

#Soccer#United States
Back to Soccer