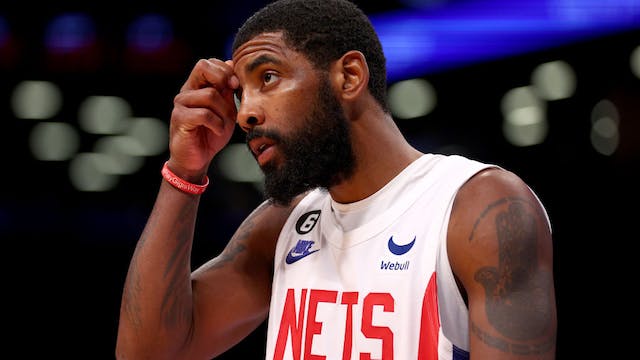 The GIST: Halloweekend in the sports world unfortunately featured the wrong kind of horror, with a series of infuriating moments spanning antisemitism, sexual misconduct and physical violence. WTF, indeed.

Antisemitism: Already known for promoting a myriad of conspiracy theories, Brooklyn Nets star Kyrie Irving doubled down on sharing an antisemitic film and book to his massive social media following last week. The Nets and the NBA condemned his decision, yet Irving is content to claim he’s the one being “dehumanized.”

Joshua Primo: The San Antonio Spurs shocked the NBA world by waiving the 2021 No. 12 draft pick on Friday, but subsequent reporting revealed that Primo had allegedly exposed himself to multiple women, including a former Spurs female employee who retained attorney Tony Buzbee, the same attorney who represented multiple women with cases against Cleveland Browns quarterback Deshaun Watson.

College football brawl: The Michigan-Michigan State rivalry took an unacceptable turn following No. 4 Michigan’s 29–7 Saturday win. Police are investigating and four Michigan State players were suspended after appearing to have ganged up on Michigan defensive back Ja’Den McBurrows in the postgame tunnel, throwing punches and kicks. Taking sore losers to a whole new level.