November 14, 2022
Just like these pigeons hanging out on the field, enjoy this bird’s-eye view of the biggest moments from Week 10.
Sports NewsFootball 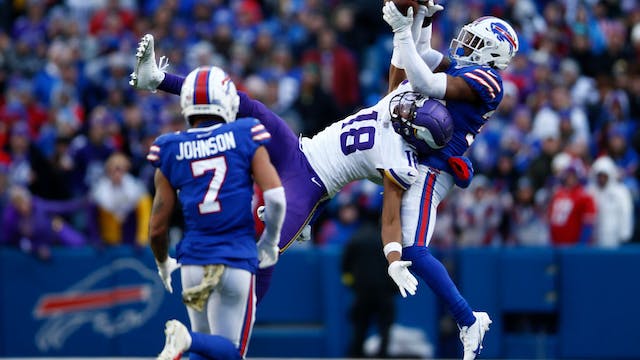 The GIST: Just like these pigeons hanging out on the field, enjoy this bird’s-eye view of the biggest moments from Week 10.

Never much love when they go OT: Our jaws are still on the floor after watching the Minnesota Vikings take down the Buffalo Bills 33–30 in overtime. With time expiring, the Bills literally fumbled away their chance to secure the regulation win while Vikings wide receiver (WR) Justin Jefferson dazzled, hauling in the catch of the year en route to the Minnesota dub.

Beginner’s luck: After a week of discussion about his controversial hiring, Indianapolis Colts interim head coach Jeff Saturday led Indy to a dub in his pro coaching debut, as the Colts defeated the (admittedly very bad) Las Vegas Raiders 25–20.

Monday Night Football: The undefeated Philadelphia Eagles host the problematic Washington Commanders in an all–NFC East battle tonight at 8:15 p.m. ET. With the Eagles flying high and the Commanders ownership flying too close to the sun, expect Philly to come out on top.