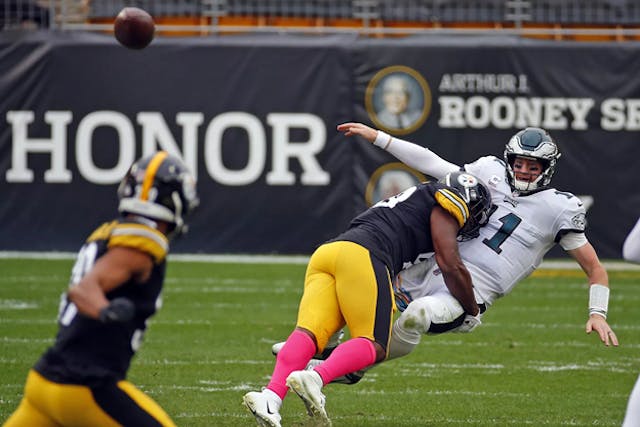 The GIST: Even though the Eagles showed signs of improvement, the Pittsburgh Steelers handed them their third loss yesterday. The good news? The Union earned a win in their first game in front of fans this season.

🏈Close doesn’t count: The Eagles lost 29–38 to the Steelers yesterday, dropping to 1-3-1. It was a scoring showdown until Philadelphia's offense fell apart in the fourth quarter. After failing to score just yards from the end zone, the Eagles’ next two possessions featured kicker Jake Elliott missing a desperate 57-yard field goal attempt and Carson Wentz throwing an interception.

Fresh faces: Despite the loss, the Eagles finally looked like a halfway-decent football team this week. They had a tough task against the Steelers, who remain undefeated and boast one of the strongest defenses in the league. Receiver Travis Fulgham stepped up in key moments again this week, scoring a touchdown early in the fourth quarter to cut the Steelers’ lead down to two. Fulgham recently graduated from the practice squad to the roster and is already proving to be an invaluable offensive weapon with 10 catches for 152 yards yesterday.

⚽️On the pitch: The Union won last night’s matchup against the Montreal Impact 2–1, improving their record to 10-3-4. With fans back in the stands, the Union put on a show with goals by midfielder Jamiro Montiero and forward Sergio Santos. The Union will face D.C. United on Wednesday at 8 p.m. ET.