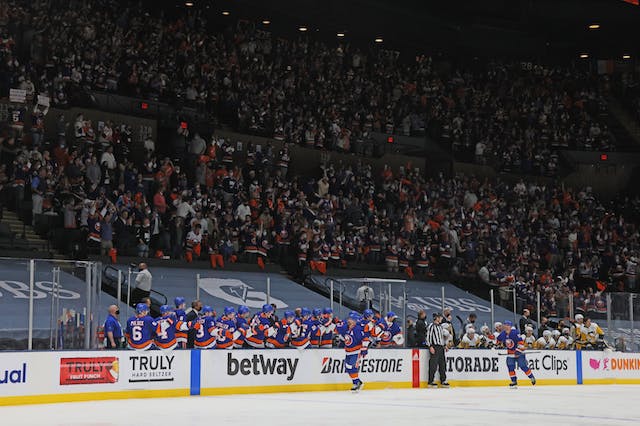 🏒Islanders: The Pittsburgh Penguins may have scored the first goal in Game 6, but the Islanders had the last laugh. Down 3–2 in the second, the Isles took it up a notch, scoring three unanswered goals in three minutes, two of which were netted by Brock Nelson. Pump it, louder!

🏀Knicks: The Knicks’ offense started off slow against the Atlanta Hawks last night, and New York headed into halftime with a 13-point deficit. But thankfully, the Knicks, led by veteran Derrick Rose, flipped the script and came all the way back to tie up the series with their 101–92 win. Nothing better than playoff basketball at the Garden.

🏀More ball: ICYMI, the Nets looked like the Monstars playing the Toon Squad (without Michael) on Tuesday when they beat the Celtics 130–108, bringing the series count to 2-0. Kevin Durant led with 26 points, followed by Joe Harris, who scored 25 in a performance of a lifetime. Yessir.

Using her off night to get in more basketball, Liberty star Sabrina Ionescu showed up to support. Catch her back at Barclays — but this time with her jersey on — when the Liberty take on the Atlanta Dream on Saturday at 2 p.m. ET.