I’m gonna be your number one

For the first time since 2018, there’s a unanimous No. 1 in the college football rankings 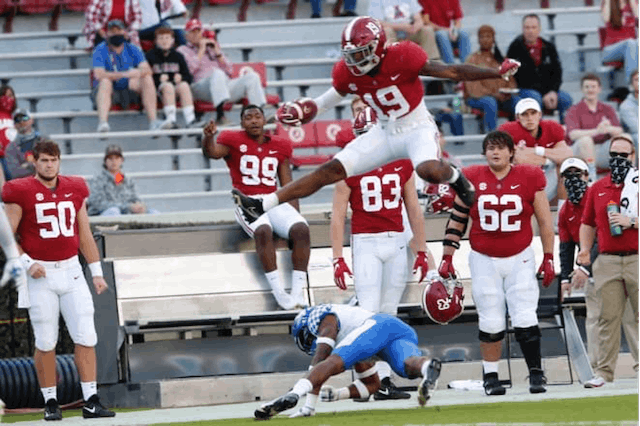 The GIST: For the first time since 2018, there’s a unanimous No. 1 in the college football rankings. Meanwhile, some close games in the NFL kept us on the edge of our couch all Sunday long. Bring on the drama.

Who’s the unanimous No. 1?: After handing Kentucky an embarrassing 63–3 loss on Saturday, the Alabama Crimson Tide kept their top spot in the rankings for a third straight week. Wide receiver (WR) DeVonta Smith set an SEC record on Saturday by hauling in the 32nd touchdown (TD) of his career. Roll, and we cannot stress this enough, Tide.

Tell me about the NFL: There were some heartbreaking injuries on Sunday, most notably to Cincinnati Bengals rookie quarterback (QB) Joe Burrow, who went down with what’s expected to be a torn ACL. We hate to see it. Now, onto some highlights you will want to watch.