October 18, 2022
After a whirlwind offseason of trade rumors and off-court messes, the on-court NBA drama is officially back, starting with an epic doubleheader tonight.
Sports NewsBasketball 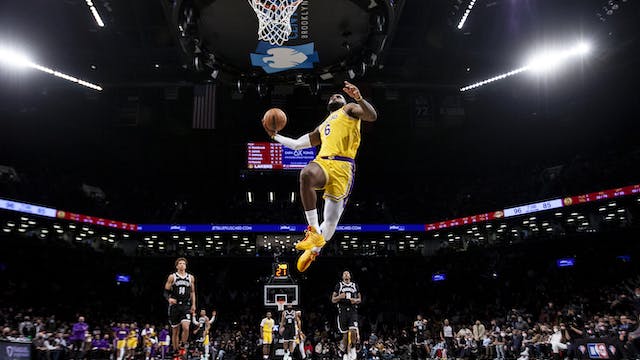 After the regular season comes the playoffs. The top six teams in each conference automatically qualify, while the seventh through 10th ranked teams will compete in a play-in tournament for the final two postseason spots in each conference. The drama.

The WC’s Golden State Warriors won their seventh franchise championship (and fourth in eight years!) last season, beating the EC’s Boston Celtics in six ferocious games. Even more impressive, the Warriors are in prime position to do it all over again — their roster hardly changed in the offseason.

Milwaukee Bucks: A healthy Bucks team is the force to be reckoned with. Two-time MVP Giannis Antetokounmpo (pronounced YAH-niss ah-dedo-KOON-bo) nearly dragged his team to the EC Finals last year after fellow star Khris Middleton exited the postseason early due to injury. The All-Star is expected to return shortly, so Fear the Deer.

LA Clippers: With their front office sparing no expense this offseason, the Clippers boast a roster deeper than the Pacific Ocean. Not to mention, All-Star Kawhi Leonard is back with a vengeance after a partially torn ACL kept him sidelined for 16 months. With his pal Paul George healthy as well, the Clippers are a WC favorite yet again.

Denver Nuggets: Jamal Murray’s return takes some of the weight off reigning MVP Nikola Jokic’s very large shoulders, but it’ll take a fully functional Michael Porter Jr. for the Nugs to show the world they have the chemistry to go the distance.

Realizing potential: The Brooklyn Nets caused quite a ruckus during the offseason, but there’s no denying this team has talent. If Kevin Durant, Kyrie Irving and Ben Simmons can find their groove, there’s no telling how this season will end.

Offseason moves: There were some major trades this summer, with Donovan Mitchell joining the Cleveland Cavaliers from the Utah Jazz, Dejounte Murray moving to the Atlanta Hawks from the San Antonio Spurs and Rudy Gobert’s (pronounced go-BARE) shocking spin to the Minnesota Timberwolves, also from the Jazz. Expect these NBA elites to shake up their new franchises.

A future star: Victor Wembanyama — remember the name. The 7'4" 18-year-old Frenchman is all anyone can talk about these days, with early projections seeding him as the first pick in 2023’s draft. How do you secure the No. 1 seed? You lose — a lot — and hope that the odds are ever in your favor come May’s Draft Lottery.

The past: The Raptors (somewhat surprisingly) returned to the playoffs after missing their shot in the 2020–21 season when they were temporarily relocated to Tampa due to COVID-19 travel restrictions. Unfortunately, they lost in six games to the Philadelphia 76ers in the first round. We truly hated to see it.

The rookie: Despite the early postseason exit, Raptors fans were still relatively happy about last season. Why? Because of rookie Scottie Barnes, who was named the 2021–22 Kia Rookie of the Year. Now it’s time to see if Barnes can become the superstar Toronto so desperately needs. Watch this space.

The future: The Raptors’ roster is largely intact from last year, besides the addition of NBA champion forward Otto Porter Jr. Pascal “Spicy P” Siakam will certainly bring the heat, as will All-Star Fred VanVleet, but as far as we’re concerned, the Raptors will go as Barnes goes.

It all begins tonight with the Celtics hosting the Philadelphia 76ers at 7:30 p.m. ET, followed by a classic Cali battle between the LA Lakers and Warriors at 10 p.m. ET. So ready for tip-off.