The luck of the Irish

The Pac-12 returned to action. 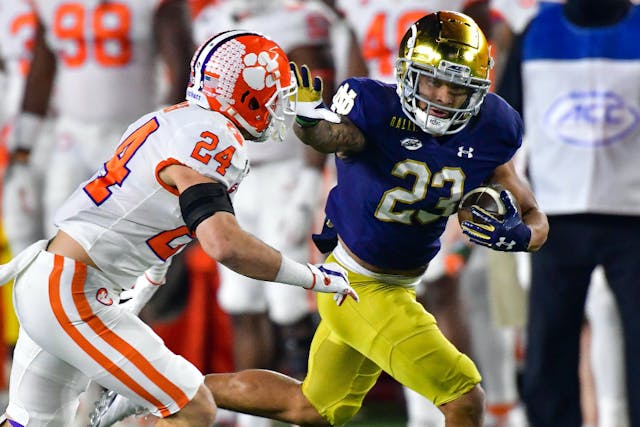 The GIST: The Pac-12 returned to action, there’s a new No. 1 in the top 25 rankings and the Irish went 2-0 against the “Orange.” We’re here for all of this weekend’s shake-ups.

Tell me more about the Irish: With a 47–40 double-overtime victory over the former No. 1 Clemson Tigers on Saturday, the Notre Dame Fighting Irish earned their first win against a top-ranked team since 1993 and snapped Clemson’s 36-game (!!!) regular season win streak. The Irish sure found their pot of gold.

Yikes! And what happened to Clemson?: The Tigers were without their starting QB and college football’s biggest star, Trevor Lawrence, who tested positive for COVID-19 last month. Freshman QB D.J. Uiagalelei (pronounced OOH-EE-AHN-GUH-LAY-LAY) performed well in Lawrence’s place, throwing for a whopping 439 yards and two TDs...but it just wasn’t enough.

Who’s the new No. 1?: Thanks to Notre Dame (the new No. 2), Clemson lost its hold on the top spot and was replaced by the Alabama Crimson Tide, marking the team’s record-setting 13th consecutive season with at least one week at No. 1. The Tide keep on rolling.