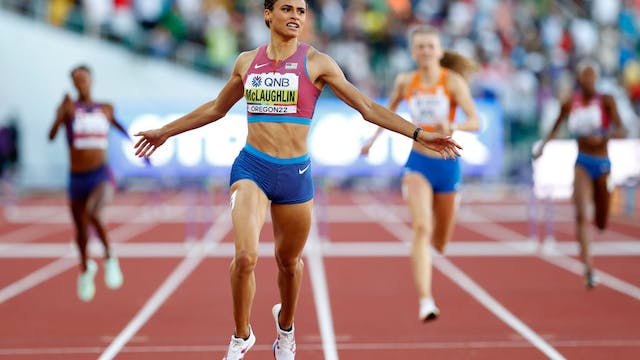 The GIST: They truly saved the best for last at the World Athletics Championships, with yesterday’s final day of action from Eugene, Oregon capping off an epic concluding weekend. ICYMI: Here are the top moments from track & field’s biggest event.

Records are meant to be broken: For the fourth time in just over a year, American Sydney McLaughlin broke her own 400m hurdles world record on Friday, blazing around the track in 50.68 seconds…1.59 seconds ahead of the second-place finisher. Incredible.

A historic heave: On Friday, American Kara Winger made history with the final javelin throw in her final World Championships, grabbing silver for her first-ever medal and Team USA’s first medal in women’s javelin.

Two laps, too furious: 2020 Olympic champ Athing Mu became the first American woman to win the 800m last night when she finished in 1:56.30, just ahead of Great Britain’s Keely Hodgkinson, who crossed the line in 1:56.38.

Teamwork makes the dream work: Team USA’s women’s 4x100m relay team stunned the competition on Saturday, racing to an unexpected gold with a time of 41.14 seconds, while the men overcame another fumbled handoff to snag silver.