NFL Divisional Round: The kids are alright 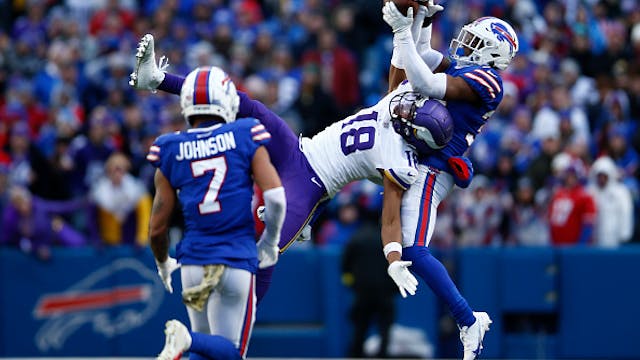 With the (truly wild) Wild Card Round in the rearview, just eight NFL teams remain in the hunt for the Super Bowl.

Speaking of familiar faces, retired legendary tight end Rob Gronkowski will be making a return to the Super Bowl for FanDuel’s Kick of Destiny, a live commercial in the third quarter where Gronk will attempt to hit a 25-yard field goal.

Wondering who to bet on? The Kansas City Chiefs remain FanDuel’s odds-on favorite to win the title (+300 at time of writing, or a 25% chance of winning) followed closely by the Buffalo Bills (+330, or about a 23% chance of winning).

But I’m getting ahead of myself. There’s still a lot of playoff football to be played before the Super Bowl, and I have my eye on the AFC matchups.

Jaguars vs. Kansas City, today at 4:30 p.m. ET: This is KC’s first playoff appearance this year after their conference-leading regular season performance snagged them a first round bye.

Cincinnati Bengals vs. Bills, Sunday at 3 p.m ET: The game of the weekend and the rematch we’ve all been waiting for after their Week 17 meeting was (rightfully) canceled when Bills’ Damar Hamlin suffered a cardiac arrest during the game.

FanDuel is offering a new user promo only until January 29th. Just sign up, place a bet of $5 or more, and receive $150 in bonus bets regardless of the outcome of that first bet. Nothing to lose.