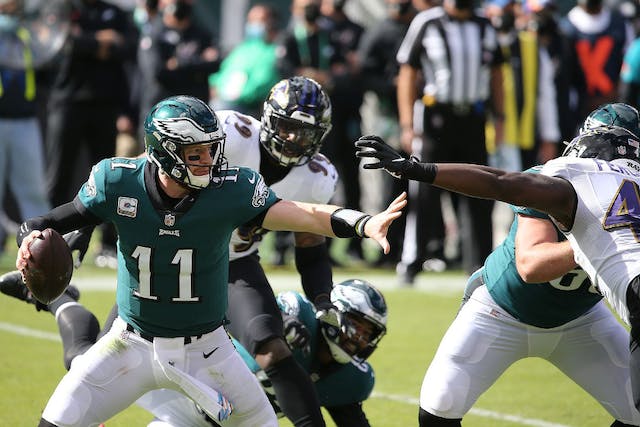 The GIST: The Eagles play the NY Giants tonight on Thursday Night Football (TNF). Even with a combined nine losses, this matchup is a battle for the top National Football Conference (NFC) East spot. 2020, you wild.

Bruised and beaten: The Birds are coming off a physically taxing game against the Baltimore Ravens on Sunday and have had little time for that much needed R&R. QB Carson Wentz took six sacks on Sunday (a lot for one game) but has to be ready to face the Giants’ defense, which is very capable of powering through the Eagles’ weak offensive line.

Showing some depth: Let’s not sugar coat it: the Eagles’ running game has struggled this season, but RB Boston Scott and QB Jalen Hurts hope to turn that around despite a tough NY defense. Hurts has been featured sparingly to fake handoffs and move the ball down the field himself while Scott, who is filling in for Sanders, earned a career-high 59 rushing yards against the Giants last year. Let’s hope he still has the G-men’s number.