The GIST: College football rang in the new year in style, with two high-powered College Football Playoff (CFP) semifinal games. With the National Championship matchup now set, the dramatic season that almost never happened is in for a thrilling finale. 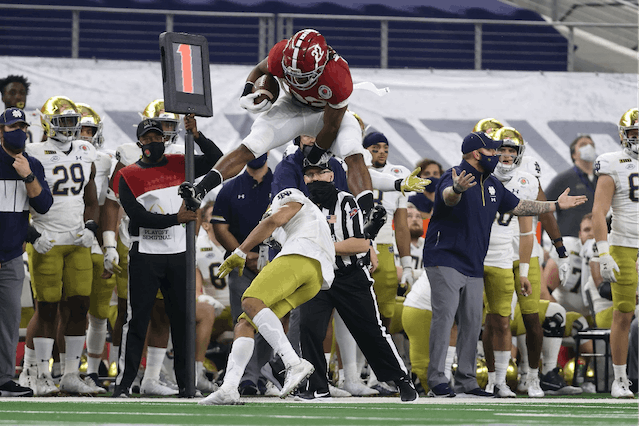 Who won: No. 1 Alabama defeated No. 4 Notre Dame 31–14 on Friday to win the Rose Bowl and try for their 18th National Championship in school history. Wide receiver (WR) DeVonta Smith posted three touchdowns (TDs), but running back (RB) Najee Harris stole the show by hurdling a defender. When Megan Rapinoe asks, you deliver.

Heisman Trophy: Alabama and Ohio State will square off in the National Championship on Monday, January 11th at 8 p.m. ET, but there’s one final award to hand out before the big game: the prestigious Heisman Trophy. Undefeated Alabama boasts two of the four finalists, with Crimson Tide RB Harris finishing fifth in voting.