Two teams punched their tickets to the NBA conference semifinals and the remaining six slots will be decided this week. It’s time to put Selling Sunset on pause (hard, we know) because there’s some epic basketball coming your way. 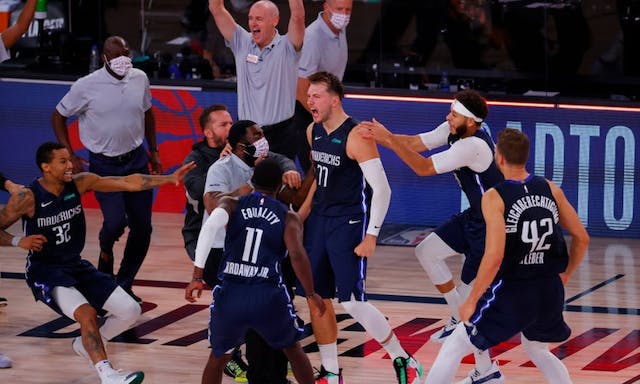 The GIST: Two teams punched their tickets to the NBA conference semifinals and the remaining six slots will be decided this week. It’s time to put Selling Sunset on pause (hard, we know) because there’s some epic basketball coming your way.

Who’s moving on?: After sweeping the Philadelphia 76ers and the Brooklyn Nets on Sunday, the Boston Celtics and the Toronto Raptors will now face each other in the Eastern Conference semifinals. Spicy.

What about the rest of the East?: The Miami Heat could break out brooms of their own tonight and advance with a win against the Indiana Pacers. And we expect the top-seeded Milwaukee Bucks to eliminate the “hometown” Orlando Magic this week, hopefully without another fist fight.

And what’s going on in the West?: On Sunday, Dallas Mavericks star Luka Dončić (pronounced DON-CHITCH) became the youngest player to record a 40-point (!!!) playoff triple-double. He also scored the game-winner with an incredible overtime (OT) buzzer-beater shot. What a day. The Mavs’ thrilling series against the Los Angeles Clippers now stands at an even 2-2.

I also heard something about a lottery?: That’s right. The worst teams in the league were still in on the action, thanks to last Thursday’s NBA Draft lottery. The Minnesota Timberwolves won the lottery and will have the first pick of the NBA Draft on October 16th.