The history of women running marathons 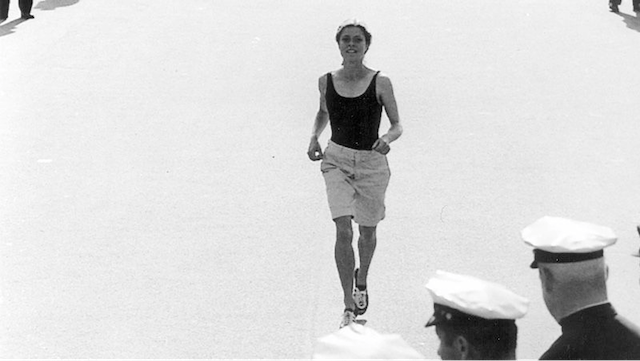 In honor of the folks crushing 26.2 miles today, we’re taking a look at the history of women in marathons — the hurdles they faced, the records they shattered and the enduring power of pounding the pavement.

There's nothing like running to give you a sense of autonomy and freedom and say, 'You can go anywhere. You just have to put one foot after another. You can get there.'

— Roberta “Bobbi” Gibb — the first woman to complete the Boston Marathon — discussing the beauty of running. BRB, lacing up our shoes right now.

The frailty myth espoused by the IOC was repeated time and time again: “ [the 1931 US national marathon championship] would be too much for any woman,” and “women are physiologically incapable of running 26.2 miles.” Some even claimed a woman’s uterus would fall out. Obviously.

The road to gender inclusion in distance running was doggedly paved by women who were fed up with this nonsense. Sound familiar? *gestures to all of historical progress*

In 1966, the aforementioned Roberta “Bobbi” Gibb hid behind a bush and snuck into the Boston Marathon, becoming the first woman to finish the race.

However, even when the AAU allowed women to officially participate in distance road running in 1972, they still didn’t sanction races in which men competed against women. As such, women were forced to have a different starting line, or begin 10 minutes before or after the men.

Next up was establishing a women’s marathon in the Olympics. Switzer played a pivotal role in campaigning for the event, boosting visibility by creating a series of women’s races in partnership with the cosmetic company Avon. (Listen, if Glossier wants to sponsor a marathon…)

And they haven’t looked back since. Women from all around the world — the aforementioned Benoit, Norway’s Ingrid Kristiansen, Kenya’s Tegla Loroupe, Japan’s Naoko Takahashi, the UK’s Paula Radcliffe and more — just kept running faster and faster and faster.

So that brings us to today, the day of the 50th New York City Marathon. Approximately 30,000 folks from all walks of life — from a Bachelorette to a World Cup champion — will push themselves through 26.2 miles. Here are a few competitors we have our eyes on.

And though she’s not running for a medal, 2017 NYC champion Shalane Flanagan is back and on a mission to run her sixth (sub-three hour!) marathon in as many weeks. Through Project Eclipse, she aims “to encourage young women that sport is a lifelong thing.” Read her lips.

Despite the progress made, inequality is still pervasive in running. (Let it be known that the iOS woman runner emoji did not debut until 2016.)

All women deserve the right to run, to race, to compete. The personal is political, and so is the physical. So whether you’re wheeling through the streets, lacing up for your next marathon or jogging around the neighborhood, know that we’re cheering you on every step of the way. Enemies of fairness and equality, hear our womanly roar.